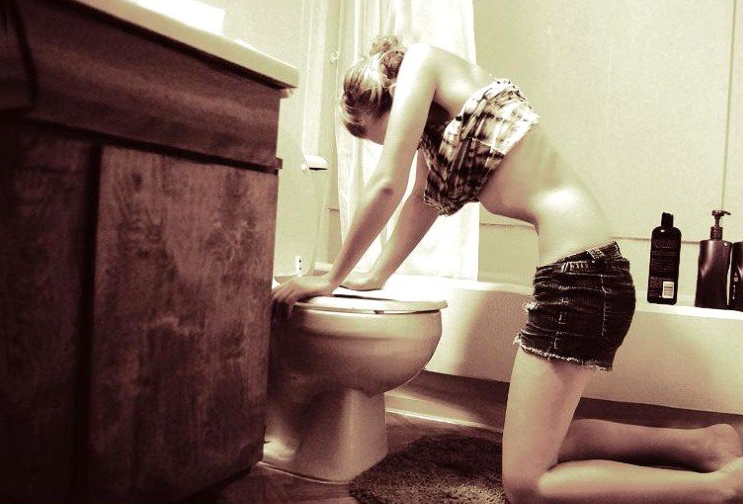 It is common that mental anorexia begins with a plump teenager who goes on a diet and succeeds all too well. Then, without really knowing when things get out of control, there is a shift from following a trend to a quest for purity or even rejection of the body.
Anorexic persons struggle actively with their appetite. Some, referred to as restrictive anorexics, are successful permanently; others, referred to as anorexic bulimics, sometimes fall into intensive guilt provoking bulimic crises and achieve slimness only by purging, taking laxatives and diuretics in sometimes very large quantities or by doing profuse physical exercise. In spite of undernourishment, anorexics can stay dynamic and active for an extraordinarily long time, which explains why they can lose weight in significant amounts before their relatives become worried. One of the first symptoms is the missing of menstrual periods called Amenorrhea. Slimness becomes thinness and finally malnutrition.
Its change is variable. In 70 % to 80 % of treated cases, change in generally favorable regarding weight and eating behavior, although psychopathologic disorders sometimes persist as do sexual and relational difficulties, character disorders, phobias, and eating behavior abnormalities which require psychotherapeutic treatment.
But it is also important to recall that anorexia nervosa can be a deadly disease. Its outcome can be lethal in approximately 5 % of the cases.

B. Intense fear of gaining weight or becoming fat, even though underweight.

Bulimia was officially classified by international psychiatric nomenclature in the 1980s. From 1987, the diagnosis of Bulimia nervosa is limited to individuals who keep a weight stabilized around normal by compensatory behaviors, such as typically self-induced vomiting.
The typical young bulimic girl most often gives the impression of being very confident. Behind this appearance is hidden a person who has profound self-doubts, who does not like herself and spends her time trying to please her acquaintances due to fear of being rejected by them.
In some other cases, personality disorders are more profound. These types of bulimics are acting out of impulse: kleptomania, nymphomania, drug addiction, alcoholic abuse, attempted suicide and violence.

The bulimic crisis most often takes place in a trance that totally escapes the person’s will. Most make themselves vomit or use laxatives and diuretics excessively, or exercise excessively as well. Bulimia can also be compensated by a period of severe caloric restriction.
Self-induced vomiting, abuse of laxatives and diuretics often cause metabolic disorders in the long term that engender a state of general fatigue, lowered intellectual performance, cramps, nervous crisis, and/or irregular periods. Bulimics also suffer from stomach, esophagus and bowel damage, dental erosion and hair loss. Sudden weight variations engender skin problems (stretch marks). Inflamed salivary glands in the cheeks (parotidis) sometimes cause facial swelling. Drepression is frequent among bulimics and is most probably favored by physical weakening.

A. Recurrent episodes of binge eating. An episode of binge eating is characterized by both of the following:
1. Eating, in a discrete period of time (e.g., within any 2-hour period), an amount of food that is definitively larger than most people would eat during a similar period of time and under similar circumstances.
2. A sense of lack of control over eating during the episode (e.g. a feeling that one cannot stop eating or control what or how much one is eating).

B. Recurrent inappropriate compensatory behavior in order to prevent weight gain, such as self-induced vomiting; misuse of laxatives, diuretics, enemas, or other medications; fasting; or excessive exercise.

C. The binge eating and inappropriate compensatory behaviors both occur, on average, at least twice a week for 3 months.

D. Self-evaluation is unduly influenced by body shape and weight.

E. The disturbance does not occur exclusively during episodes of Anorexia Nervosa.

Whereas bulimics can control their weight with difficulties by self-induced vomiting or other methods, the binge eater does not use such compensatory behavior and is then most of the time overweight. According to the first estimates, 20 to 50 % of overweight individuals who seek medical care to lose weight suffer from eating disorders of this type.
As opposed to Anorexia nervosa and Bulimia nervosa, binge eating disorder is of identical frequency between both genders (the proportion of anorexic men is one man for every nine women, and one bulimic man for for every nine women).
Obese binge eaters are more preoccupied by food and by their weight than obese people who are not binge eaters and who are always restraining themselves without succeeding and who are more unsatisfied with their appearance. They are also more psychically troubled : more depression, panic attacks and phobia would be observed. They also suffer from more personality disorders.
One cannot say today if their overweight is caused by eating disorders or on the other hand if binge eating disorder results from their efforts made with restrictive behavior in an attempt to lose weight.

A. Recurrent episodes of binge eating. An episode is characterized by:
1. Eating a larger amount of food than normal during a short period of time (within any two hour period)
2. Lack of control over eating during the binge episode (i.e. the feeling that one cannot stop eating).

B. Binge eating episodes are associated with three or more of the following:
1. Eating until feeling uncomfortably full
2. Eating large amounts of food when not physically hungry
3. Eating much more rapidly than normal
4. Eating alone because you are embarrassed by how much you're eating
5. Feeling disgusted, depressed, or guilty after overeating

E. The binge eating is not associated with the regular use of inappropriate compensatory behavior (i.e. purging, excessive exercise, etc.) and does not occur exclusively during the course of bulimia nervosa or anorexia nervosa.

Night eating syndrome: Albert Stunkard, an American psychiatrist, described in 1955 a behavior consisting of an imperious need to eat during the night that he named "Night eating syndrome". These individuals regularly wake up during the middle of the night and cannot sleep before having eaten a large meal, often gulped down in half sleep. The next morning, they only remember confusedly what they have eaten during the night episode. It is common that they also suffer from sleep disorders: somnambulism or sleep apnea. This behavior can be understood as a loss of control, favored by the night relaxation. They have controlled their eating behavior during the whole day; this control is defeated during the night. Some various neuroendocrine disorders were noticed being associated with night eating syndrome and are leads for research: smaller rise of night leptin and melatonin rate, elevated plasma cortisol concentration.

Carbohydrate craving: Described by R. and J. Wurtman in 1981. They are imperious needs exclusively for carbohydrates (snack food and sweet food). According to the authors, it would resemble a drug addiction and would be explained by an addiction of the serotonin-releasing brain neurons which would be stimulated by eating sucrose. But some further studies have shown that bulimics and other binge eaters are seldom eager for sugar exclusively. Let's recall that cakes, biscuits and chocolate are richer in fat than in sugar. Sugar cravings have also been cited in regard to seasonal depression. It consists of depressive states starting regularly in the fall and ending in the spring, being characterized by a slowing down of mental processes, fatigue, longer sleep time, overeating of sugar and weight gain.

Chocolate obsession: Chocoholics can be athletic, active or hyperactive, sociable people, and would have tendency to internalize conflicts. They consume chocolate in stress or internal conflicts situations. Various biochemical models have been evaluated to explain this appetence: the effect of sugar on the brain, serotonin level, phenylethylamin, increasing serotonin production, beneficent effects of magnesium, all present in chocolate. These various theories could not be verified, but we can stick to the idea that the intense sensorial pleasure given by chocolate leads to eating it in large quantities.